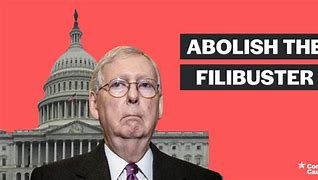 When most people think of a filibuster, they imagine a senator standing up and talking for hours on end to block a bill. While it used to work that way, you might be surprised to learn that today’s filibuster looks nothing like that.

A filibuster can refer to any tactic a senator uses to extend debate on a bill and block it from being passed.

More specifically, in the U.S. Senate today, a filibuster allows a minority of senators (or even one senator) to extend a debate as long as they want. This is typically done to delay action on a piece of legislation they oppose. Debate could theoretically go on forever, blocking a final vote indefinitely. (But this isn’t how it used to be — more on that below.)

More on the Filibuster