Ever hear “Nobody is Above the Law”?  Well I have many many times.  Congress has taken this saying and has proven that it is so wrong.   Now this should be “All politicians are above the law”  Just look ate the one question,

Do you support the protection of government officials, including law enforcement officers, from personal liability in civil lawsuits concerning alleged misconduct?

Why would you elect any Representatives the would support this question?  The question is telling you if your or any government officials, including law enforcement officers, from personal liability in civil lawsuits concerning alleged misconduct that they cannot be prosecuted for anything.  There will not be any that they can be sued for or prosecuted for.  They can break any law and can move on without consequences which is observed.

If your representative supports this then you have a representative that is very corrupt and he/she will not be in your best interest.  Vote him/her out of office because he/she is working for the people that donate to them only.

Right now there are plenty of real-life examples with Donald Trump and the crimes of 140 Republicans U.S. Congress  Representatives that have not been arrested for Treason.  Trump supporters that raided the Capital on January 6, 2021 should be getting sentences of 20 or 30 year are getting away with days and short term sentences instead.   This is not justice or even close to being justice.

The public record points to widespread criminality, but Trump has yet to be brought to justice. 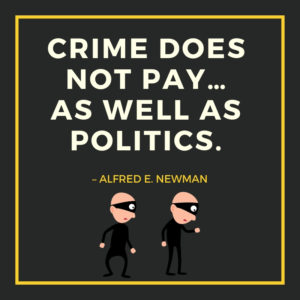 III. Offenses Related to the 2016 Election, the Hush-Money Payoffs to Stormy Daniels and Karen McDougal, and the 2017 “Reimbursements” to Michael Cohen.

The House January 6 Select Committee is diligently investigating the origins of the insurrection, including Trump’s part in inciting the riot at the Capitol that delayed the certification of Joe Biden’s victory. Both Bennie Thompson (D-SC), the committee’s chairperson, and Liz Cheney (R-WY), the ranking Republican, have disclosed that Trump is under consideration for a criminal referral to the Justice Department.

At the same time, state-level investigations against Trump appear to be heating up in New York and Georgia.

While we endure the agonizing wait, investigators have a truly staggering array of potential charges to shift through and analyze. They include:

There is no guarantee, of course, that any of this will lead to an actual arraignment.

While in office, Trump was shielded with temporary immunity from federal prosecution as a result of the Justice Department’s longstanding policy against indicting a sitting president. Although that immunity is gone, Trump would nonetheless be protected by the presumption of innocence, just like any other private citizen, were he to be prosecuted now. And it would represent a historic first for a former U.S. president to be charged with a crime. No prosecutors, state or federal, are going to roll the dice unless they are confident that they can prove Trump’s guilt beyond a reasonable doubt.