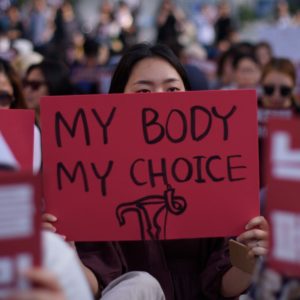 Pro-Choice supporters oppose all efforts to undermine or overturn Roe v. Wade, and support appointment of federal judges who will uphold women’s most fundamental rights.

Despite major advances in civil and political rights, our country still has a long way to go in addressing the issues of gender inequality and reproductive freedom. Right now, extreme forces on the right, mainly Republicans, are launching political attacks and passing draconian laws at both the state and national level with the goal of ending a woman’s right to choose. We must fight back together, and defend a woman’s right to control her own body and economic future.

Our leaders need to:

Pro-Life supporters real agenda is a Power Grab over women bodies.   Pro-Life Supporters are usually religious people that want to control women’s bodies and don’t believe that women can make their own decisions.   These supporters are very bad and horrible people hiding under God which does not exist in reality.  Pro-Life supporters have major mental issues.  These people have no business in public office and needs to be replaced, period.