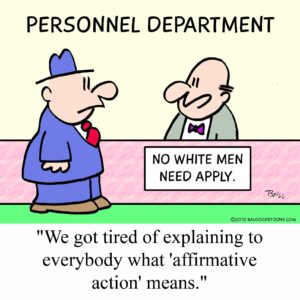 For federal contractors and subcontractors, affirmative action must be taken by covered employers to recruit and advance qualified minorities, women, persons with disabilities, and covered veterans. Affirmative actions include training programs, outreach efforts, and other positive steps. These procedures should be incorporated into the company’s written personnel policies. Employers with written affirmative action programs must implement them, keep them on file and update them annually.

Affirmative Action is regulated by  the U.S. Department of Labor.

People that oppose Affirmative Action usually are people that have a lot of hatred for other people like being not of their color, or not their Religion, or does not agree with their politics.  These people have major mental issues that needs correcting.   They are not very good people.

Affirmative action in the United States is a set of laws, policies, guidelines, and administrative practices “intended to end and correct the effects of a specific form of discrimination”[1] that include government-mandated, government-approved, and voluntary private programs. The programs tend to focus on access to education and employment, granting special consideration to historically excluded groups, specifically racial minorities or women.[1][2] The impetus toward affirmative action is redressing the disadvantages[3][4][5][6][7] associated with past and present discrimination.[8] Further impetus is a desire to ensure public institutions, such as universities, hospitals, and police forces, are more representative of the populations they serve.[9]

In the United States, affirmative action included the use of racial quotas until the Supreme Court ruled that quotas were unconstitutional.[10] Affirmative action currently tends to emphasize not specific quotas but rather “targeted goals” to address past discrimination in a particular institution or in broader society through “good-faith efforts … to identify, select, and train potentially qualified minorities and women.”[1][11] For example, many higher education institutions have voluntarily adopted policies which seek to increase recruitment of racial minorities.[12] Outreach campaigns, targeted recruitment, employee and management development, and employee support programs are examples of affirmative action in employment.[13] Nine states in the United States have banned race-based affirmative action: California (1996), Washington (1998), Florida (1999), Michigan (2006), Nebraska (2008), Arizona (2010), New Hampshire (2012), Oklahoma (2012), and Idaho (2020). Florida’s ban was via an executive order and New Hampshire and Idaho’s bans were passed by the legislature. The other six bans were approved at the ballot.[14] The 1996 Hopwood v. Texas decision effectively barred affirmative action in the three states within the United States Court of Appeals for the Fifth Circuit—Louisiana, Mississippi, and Texas—until Grutter v. Bollinger abrogated it in 2003.[15]

Affirmative action policies were developed to address long histories of discrimination faced by minorities and women, which reports suggest produced corresponding unfair advantages for whites and males.[16][17] They first emerged from debates over non-discrimination policies in the 1940s and during the civil rights movement.[18] These debates led to federal executive orders requiring non-discrimination in the employment policies of some government agencies and contractors in the 1940s and onward, and to Title VII of the Civil Rights Act of 1964 which prohibited racial discrimination in firms with over 25 employees. The first federal policy of race-conscious affirmative action was the Revised Philadelphia Plan, implemented in 1969, which required certain government contractors to set “goals and timetables” for integrating and diversifying their workforce. Similar policies emerged through a mix of voluntary practices and federal and state policies in employment and education. Affirmative action as a practice was partially upheld by the Supreme Court in Grutter v. Bollinger (2003), while the use of racial quotas for college admissions was concurrently ruled unconstitutional by the Court in Gratz v. Bollinger (2003).

Affirmative action often gives rise to controversy in American politics. Supporters argue that affirmative action is still needed to counteract continuing bias and prejudice against women and minorities. Opponents argue that these policies constitute reverse racism and/or amount to discrimination against other minorities, such as Asian Americans, which entails favoring one group over another based upon racial preference rather than achievement, and many believe that the diversity of current American society suggests that affirmative action policies succeeded and are no longer required.[19] Supporters point to contemporary examples of conscious and unconscious biases, such as the finding that job-seekers with African American sounding names may be less likely to get a callback than those with white-sounding names, as proof that affirmative action is not obsolete.[11]